During the presentation by David Rye, MD, PhD, titled “What are the latest developments in research on idiopathic hypersomnia?” at the Beyond Sleepy in the Mile-High City Hypersomnia Conference, he pointed out that, while on the one hand without a known biological biomarker there is a large unmet clinical need for people with idiopathic hypersomnia, on the other hand a growing awareness garnering increasing interest and recognition within the medical community is gaining momentum.

Following is an abbreviated summary of his talk prepared by a volunteer medical writer. As Dr. Rye had mentioned, this is not an all-inclusive list but specific highlights of recent development in research, collaboration, and treatments of idiopathic hypersomnia:

In order to help discover/define the biological pathways in which the somnogen calls “home” as well as, ultimately, the very nature/structure/chemical identity of the somnogen itself, the Emory University sleep research team is collaborating with:

Genetics/Molecular Biology– Daly DD and Yoss RE A family with narcolepsy (Mayo Clinic Proceedings (1959) 34:313-319). Dr Rye spoke about this during this conference as well as at the 2015 Hypersomnia Foundation Conference.   Four generations of this family were identified. Narcolepsy Type 1 is now known not to be as heritable as the sleepiness described in this family. Only 3 of 13 (16) of these family members exhibited cataplexy. So hypersomnia/hypersomnolence, not Narcolepsy Type 1, appears to be what’s being inherited in this family. Dr Rye also showed several smaller family trees collected at Emory, in which IH, Narcolepsy Type 2, and long sleepers cluster together in families.

Toward genetic research Dr. Rye/Emory has collected $187,500 in donation commitments to begin studies of the genetic components underlying IH and related disorders.  The overall goal is to raise $250,000 to fund these preliminary studies, and using this data to position themselves to apply for larger streams of NIH or foundation funding. They are in the process of collating samples and deciding how to best assign diagnoses given the diagnostic challenges alluded to above (e.g,  IH vs. Narcolepsy Type 2 vs. long sleepers).  The team is also discussing internally and with external collaborators what best first strategies to employ (Genome Wide Association Studies (GWAS) vs. whole exome sequencing [which would be feasible and possibly more fruitful with larger families inclusive of affected and unaffected individuals]).
Most comparable GWAS studies require  ~ 1000 samples. The Emory sleep program has 825 plasma samples, 783+ DNA samples, 473 CSF samples. Including DNA samples collected since November 2015 waiting cataloging into their larger biorepository.
Also, 11 patients with repeat CSF samples have been collected under different clinical conditions, which should be very useful for determining what features are unique to wellness vs. hypersomnia by way of proteomic and metabolomics comparisons.
Very recently skin biopsies h=are being collected to derive fibroblasts from which they are then able to morph into immature brain cells to study more intensively, and in a repeated manner.

Clinical Trials & Treatments:  Pentylenetetrazol (PTZ; aka BTD-001). This is an anti-GABA-A receptor study drug with mechanism action similar to that of clarithromycin.  It is being further developed/studied by Balance Therapeutics for the treatment of cognition and memory deficits in Down’s Syndrome as well as hypersomnia/hypersomnolence in IH and Narcolepsy Type 2.  Interestingly, PTZ is still available as one ingredient (viz., cardiazol) of a cough syrup available in Italy. This is the ongoing clinical trial with the acronym of ARISE. Www.arisestudies.com is the first industry sponsored clinical trial of any treatment seeking FDA approval for treatment of IH. This trial is testing the efficacy of Pentylenetetrazol (PTZ) in a rigorous, controlled, crossover, and blinded design.  ARISE is actively enrolling patients at > 20 centers including Emory University (see the website for participating centers). This drug has a long and substantial safety record (i.e,. Phase 1 requirement of safety in humans has already been established). A small, unblinded Phase IIa study – 5 subjects (3 IH and 2 Narcolepsy Type 2) each with hypersomnia responsive to clarithromycin and/or flumazenil demonstrated very promising results. So much so that the much larger Phase IIb study is moving forward necessitating recruitment of 120 subjects (60 each with IH and Narcolepsy Type 2).

Emory’s open label experience with flumazenil continues to be promising and publication of their “open-label” experience in an initial 153 treated patients is forthcoming. The paper was accepted June 27, 2016 publication in the Journal of Clinical Sleep Medicine. Beyond this experience which is limited to those patients seen and treated by Drs. Rye or Trotti prior to January 1, 2015, it is estimated that nearly 300 patients with hypersomnia resistant to traditional treatments with wake promoting drugs have been empirically treated with flumazenil through Emory’s outpatient sleep clinic alone.  Many additional physicians outside of Emory are increasingly prescribing flumazenil to their patients. 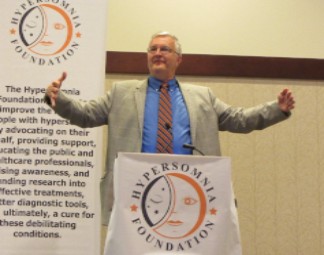