This article reviews three central disorders of hypersomnolence (CDH), which include narcolepsy type 1, narcolepsy type 2, and idiopathic hypersomnia. The main symptom patients experience in all three of these disorders is excessive daytime sleepiness (EDS), which cannot be explained by other medical conditions or by not getting enough sleep. 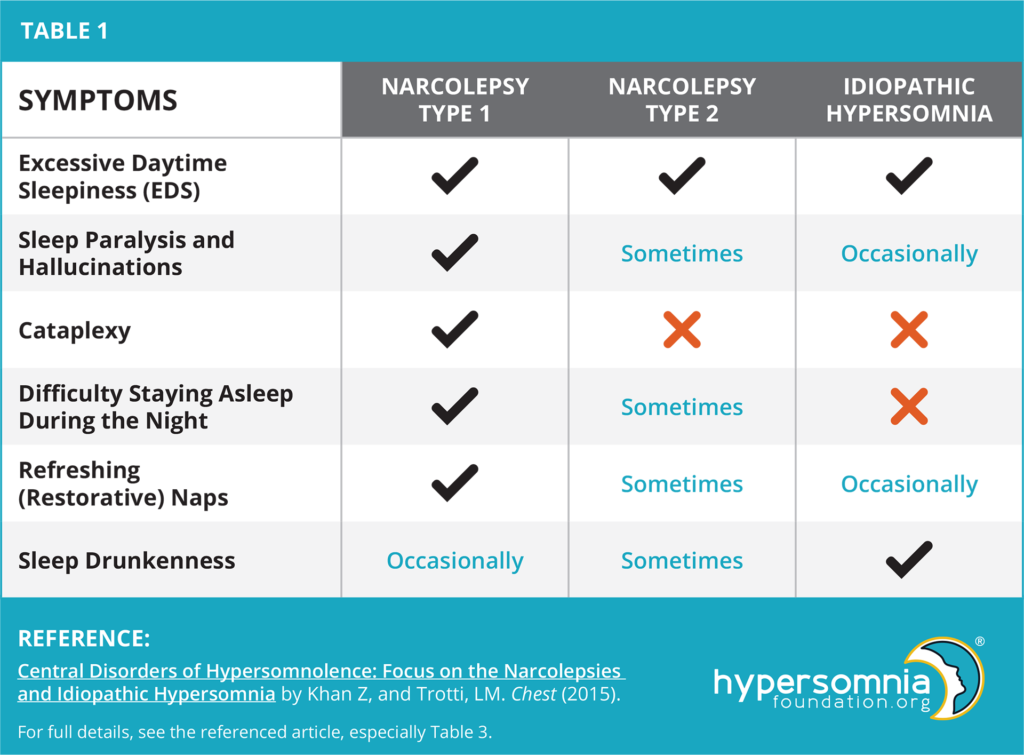 Patients with narcolepsy type 1 have low levels of hypocretin (also called orexin). Hypocretin is a substance produced in the brain that is involved in regulating many processes, including sleep, feeding, stress response, and reward. These low hypocretin levels are probably due to both environmental exposure and inherited genetic factors. Getting an infection may also cause narcolepsy to develop. For example, narcolepsy became three times more common in China after an outbreak of the H1N1 flu virus.

Although several studies have investigated factors that may contribute to the development of narcolepsy type 2 and idiopathic hypersomnia, it is currently unknown whether environmental exposures or genetic factors contribute to these disorders.

Three months of EDS symptoms are necessary for a diagnosis of all three central disorders of hypersomnolence. For narcolepsy type 1 to be diagnosed, the patient must show either or both of the following: (1) they must have cataplexy, fall asleep in an average of eight minutes or less during naps on a daytime sleep study (MSLT), and enter into rapid eye movement (REM) sleep for at least two out of five naps during this sleep study, and/or (2) have low hypocretin levels.

For narcolepsy type 2 to be diagnosed, patients must also fall asleep in an average of eight minutes or less and enter into rapid eye movement (REM) sleep for at least two out of five naps during the MSLT. They must also not have cataplexy, have normal (or unknown) hypocretin levels, and their symptoms must not be explained by any other causes.

For the diagnosis of idiopathic hypersomnia to be made, patients must not have cataplexy, must enter into REM sleep fewer than two out of five naps during the MSLT, and their symptoms must not be explained by any other causes. Additionally, they also must show either or both of the following: (1) they must fall asleep in an average of eight minutes or less during the MSLT, and/or (2) they must sleep at least 660 minutes (11 hours) per day (either in a 24 hours sleep study or in a week of at-home monitoring).

The main goal of treating patients with all three central disorders of hypersomnolence (narcolepsy types 1 and 2 and idiopathic hypersomnia) is to relieve EDS. There are several medications approved by the US Food and Drug Administration (FDA) to treat narcolepsy. There are none, however, approved by the FDA to treat idiopathic hypersomnia, so the medications approved for narcolepsy are often used “off-label” to treat these patients.

One of these medications, modafinil, has been shown to help patients with idiopathic hypersomnia. Modafinil is unlikely to be abused, but it can cause several unpleasant side effects, like headaches and nausea. Other medications used to treat the central disorders of hypersomnolence include amphetamine stimulants, such as methylphenidate (Ritalin) and dextroamphetamine. These can also help decrease EDS, but they have associated cardiovascular and psychiatric side effects. Several other medications are also used to treat the central disorders of hypersomnolence (including sodium oxybate and antidepressants), and other new therapies are currently being developed.

Further studies are necessary to develop better diagnostic tests and treatment, especially for patients who do not respond well to medication. Additional research is also important to better understand the underlying causes of these disorders.

Excessive Daytime Sleepiness (EDS): ““The inability to stay awake and alert during major waking episodes of the day, resulting in periods of irrepressible need for sleep or unintended lapses into drowsiness or sleep.” (1)

Sleep drunkenness: “A prolonged state after awakening in which motor functions return before full awareness or there is partial return of both.” (1)

Rapid eye movement (REM) sleep: “One of the four stages of sleep. During REM sleep, the eyes move rapidly while closed and dreams occur (2).”

MSLT: The multiple sleep latency test (MSLT) measures how quickly you fall asleep in a quiet environment during the day. The MSLT typically consists of five scheduled naps, each nap opportunity lasting 20 minutes, separated by two-hour breaks. During each of the nap opportunities, you lie in bed in a darkened quiet room and try to go to sleep. The time that it takes you to fall asleep is called the sleep latency. You will be allowed to sleep for a maximum of 15 minutes during each opportunity (You will be awakened if you don’t wake up on your own). If you do not fall asleep within 20 minutes, the nap trial will end.

We are grateful to Jodi Godfrey, PhD, for summarizing this journal article.