Until the summer after I graduated from high school, I had seemingly unlimited energy. A typical day for me would be waking at 5:00 am, attending class until 1:30, and then cramming in homework before heading to marching band or track practice. Often I’d arrive home after dark, allowing just enough time to eat dinner and then continuing to study late into the night. Sleep wasn’t on my priority list. I never gave a thought to the fact that I might be abusing my body on so little sleep.

All that changed when I got sick with mononucleosis and tonsillitis a few months before I started college —in hindsight, a turning point in my life. In the fall, I started napping between college classes and drinking caffeine both day and night to stay awake while studying. I was also getting sick more frequently. Every few months, I’d come down with another virus. Strep and tonsillitis seemed to be a regular occurrence in my life. I managed to push through though and successfully graduated in 2002 with my BS in wellness leadership. What’s funny for me in looking back is that, even though my major was wellness, my professors spent little if any time discussing sleep health.

After graduation I worked a number of soul-sucking jobs because I’d been told I’d never make any decent money working in wellness. Each of these jobs paid well, but doing work that wasn’t authentically me left me feeling stressed out and miserable. By 2007 I’d had enough and knew that if I didn’t make a change, something bad was going to happen. I certified as a personal trainer and began working for a local gym. The new environment and focusing each day on my passion of helping others get healthy definitely improved my mental health, but my daily fatigue continued to worsen. I’d drive home and nap between clients, leaving little time for me to exercise. I felt like a hypocrite. Here I was, a personal trainer lecturing my clients on making time to exercise a priority in their lives, and yet I wasn’t able to model those behaviors myself.

Depressed, I began seeing a psychiatrist. Was something wrong with me? Was I just not motivated enough? Like many others with a sleep disorder often do, initially I was diagnosed with depression and prescribed an antidepressant. The medicine seemed to help for a while. I actually felt a little more energetic, but, over time, the fatigue took over again. A visit to my primary care doctor revealed normal lab test results, so she referred me to a sleep specialist. I completed a sleep study, was told I had sleep apnea, and was sent home with my first CPAP machine. Being only 28 years old at the time and newly married, being prescribed a CPAP felt like being given a life sentence. Three months later, I gladly traded that machine for an oral appliance, which definitely made a difference. I wasn’t running around like the energizer bunny, but I didn’t feel like I needed to stay in bed all day either. I slowly came to terms with having sleep apnea, even though I didn’t fit the typical profile of an overweight middle-aged man. I tried to go about living my life as usual and thought my sleep issue was FIXED.

The following year, my husband and I welcomed our son into the family—I was tired during my pregnancy, but nothing serious. In the instant that Blake was born, however, my whole world changed forever. I could no longer compensate for feeling tired by napping during the day, sleeping in on weekends, and getting to bed early. Those first few months were so hard. I was exhausted and depressed and wondered if maybe I wasn’t cut out for this “being a mom” thing. I also didn’t know at the time that the extreme sleep deprivation I was experiencing wasn’t your typical “new mommy” kind of tiredness.

Six months later, I visited my sleep physician and explained that, in addition to being so sleepy during the day, I’d been having vivid recurrent dreams during my naps of a burglar breaking into the house. I was terrified the burglar was going to take Blake. As I would see the shadow of a man standing over me, I would try to scream or move, but my body wouldn’t respond. After hearing about what I’d been going through, my sleep physician ordered another sleep study and an MSLT, which showed that I had narcolepsy—what a relief! For years, I had felt a little bit crazy; I couldn’t stop beating myself up about being lazy or unmotivated. I could finally breathe knowing that a real reason explained all the things I’d been battling for years. 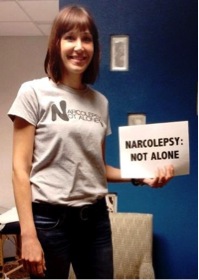 Living with two sleep disorders has been really challenging for me and for my family. I’ve worked with several different sleep specialists and tried out a variety of different medications. However, usually any positive effects of medications only last for a while, and they often come with many side effects. Coming to terms with the fact that I’ll have to live with these disorders the rest of my life has been a slow process. Thankfully I have a huge support system that includes my family, friends, and coworkers. Because of their support I’ve been lucky enough to be able to juggle a career I love–working as a Fitness & Wellness Specialist–with being a wife and mom to my wonderful husband and children.

I also found that connecting with others living with sleep disorders could sometimes be just as helpful as taking a medication. Shortly after being diagnosed with narcolepsy, I discovered a blog called REM Runner written by July Flygare, the founder of Project Sleep, a nonprofit that raises awareness for sleep health and sleep disorders. Through Julie’s blog, I discovered the “NARCOLEPSY: NOT ALONE” campaign. Julie created this international campaign to raise awareness about narcolepsy and to prove that narcolepsy is real and that those living with the disorder are NOT ALONE. I participated in the campaign and then felt inspired to get involved with advocacy myself. I’m on a personal mission to spread the word and possibly help someone else out there that might be feeling the same way I once did. I believe that now is the time to help the world understand that sleepiness is NOT laziness, that napping is NOT a luxury, and that sleep disorders are REAL!