Catherine Friedrich Murray, one of the founders of the Hypersomnia Foundation, will step down from the Foundation’s Board of Directors when her term of office concludes on January 18, 2017. The Board of Directors has elected Diane Powell to assume Cate’s position as Chair. Diane, who has been a member of the Board since October 2015, says “I feel so fortunate to have had Cate’s example and her 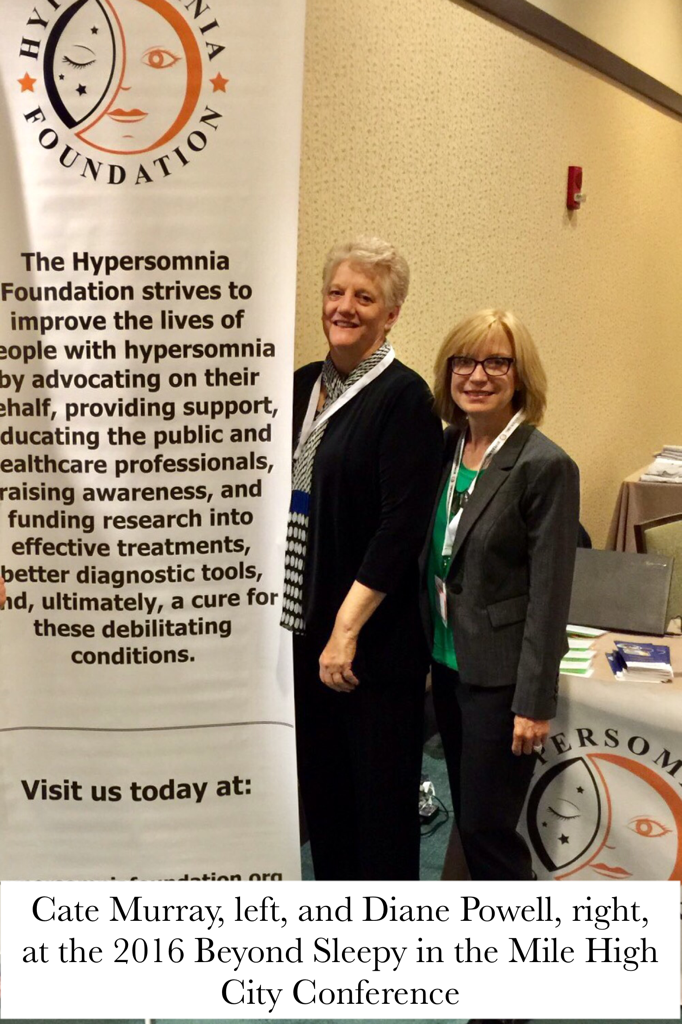 wisdom to prepare for this change. She has always been a great source of inspiration, and I know that we can always reach out to her for advice for the Hypersomnia Foundation.”

Ms. Powell, who is a licensed clinical social worker, has worked on fundraising for the Hypersomnia Foundation, including the recent “Let’s Get #BeyondSleepy” campaign, the most successful in the Foundation’s history. She is also a facilitator and liaison with the Foundation’s People with Hypersomnia and Advocates Advisory Council (PAAC), with whom the Board consults regarding the priorities and needs of the hypersomnia community.

Ms. Murray has pledged her continuing support of the Hypersomnia Foundation and recalls with great fondness the first conversation that she had with David and Cat Rye about starting the organization: “I had enjoyed my work with Dr. Rye when I was the executive director of the Restless Legs Syndrome Foundation. When he called me out of the blue almost four years ago and asked for my help, I was taken aback. Who could possibly have leaked the news that my daughter had been diagnosed with idiopathic hypersomnia just a few weeks before? But, of course he didn’t know. It was simply serendipity.”

“The past three years have been exciting, challenging, and so rewarding, as we have touched countless lives, educated physicians and scientists, and helped people to understand that they are not alone in their struggles with hypersomnia. Of all that we have accomplished as an organization, and that list is long, I am most proud of the incredible research tool that I played a small part in launching, the Hypersomnia Foundation’s Registry at CoRDS. More than 500 members of the hypersomnia community have generously contributed their valuable information, and I firmly believe that this registry will change the face of hypersomnia and of hypersomnia research for decades to come.”

“There is so much work yet to do, but I rest assured knowing that the Hypersomnia Foundation is in very capable hands. I look forward to greeting old and making new friends at the regional conference in Boston in June. As I concentrate on finishing my masters in nonprofit leadership, I will never be more than a phone call or email message away.”

The Hypersomnia Foundation is thrilled to announce the election of two new members of the Board of Directors.

Michelle Emrich is an internal medicine physician who gave up her cherished career after being diagnosed with severe idiopathic hypersomnia in 2011. She is passionate about raising awareness of and research funds to study the primary hypersomnias and, after recently serving on the Hypersomnia Foundation’s PAAC, is excited to begin serving on the Board of Directors.

Amy Haraden is a long-time supporter of and volunteer for the Hypersomnia Foundation and is delighted to expand her role to serve as a member of the Board of Directors. Prior to being elected to the Board, she was one of the founders of the PAAC and volunteered on the Council since its inception in late 2015. Amy is an accounting analyst at TripAdvisor and a graduate of Stonehill College (BSBA) and Northeastern University (MSA).